“Game with almost no story to tell of yesterday evening. Almost needless to talk about it, we all saw the result, and the poor opponents, although they had a few opportunities.  Some amnesia incidents in defense but within the norm, considering the upcoming match against Lazio on Tuesday. Without much effort, we are to -5 from Juve, waiting for the match between Juventus and Napoli tonight.

Last night we were just surprised by the few and late changes made by the Giallorossi coach. Nainggolan that is not replaced even on very quiet 2-0 advantage; Totti looked a bit rusty and not very responsive when he came on, we were not used to.  Perhaps it was because he’s no longer’ used a lot, or maybe really it is the age that advances. Relentlessly. But mostly we want to talk about Luciano Spalletti. We said it yesterday. Everything must start from the Tuscan technician.   The Club future plans and programmes, he asked for guarantees, clarity for the future. As we had hoped, we hope it is so clearly been made. But the fact that they were all silent to do with the renewal after the meeting between him and the leadership, the feeling is decidedly negative about it. 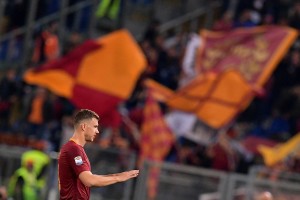 Spalletti maybe is going to leave.  If so, then it must ‘start from zero, with young players project, perhaps illustrious capital gains, hoping for a miracle Monchi, Sevilla type or even Atletico Madrid. If it were so it would be yet another American Revolution. Whatever happens, we are Roma fans and we always hope the best for the club, the team and the city. But if it is only profit and no trophies then it would the usual failure. Yet, another. Meanwhile, eyes on the Derby on Tuesday, the semi-finals of the Italian Cup, a 0-2 reverse will not be ‘easy, but it is time to change the history of Roma football club, we need attempted comebacks that turn into business. We must do it this time! We are confident. Daje! C’mon Roma!”.