“Chronicle of an expected victory; so it seems. Yet, the recent videoleaks about Radja Nainggolan did not help preparing this match away in Calabria.
Juventus were nearly held here only three days ago, hanging on a nil nil draw after one hour of play. Roma had an easier task when they were awarded a dubious penalty in the first half – only to be squandered by Edin Dzeko. But Roma were full in control, conscious that soon or later could break the deadlock. 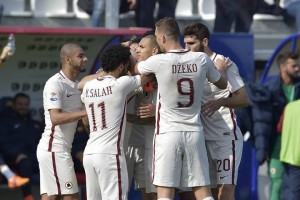 Who else? Radja Nainggolan once again proved to be the cracking player he is by inventing the first goal to put Roma in the lead. Dzeko eventually doubled thanks to a great pass by Paredes, and Salah assist. Then, ordinary management and three points. Roma at -7 to Juve, +2 over Napoli.
Next Villarreal, first leg in Spain on Thursday. Then, Torino at home.  February is the most important part of the season, league, Europa league and Coppa Italia against Lazio. The new stadium plans are also at the last stage of approval. A lot at stake! Daje Roma!”.
Stefano Sale @ asroma.ie
Tagged: ASROMA, asromacorner, crotone-roma
Lascia un commento →