The trend remains the same.  Roma cannot play with same intensity and concentration for 90min. If before it was a good first half and a sloppy second, last night the trend went the opposite way.  Torino started brighter and created problems for Alisson, once again, once again just superb!

The brazilian keeper will be snapped up by a big club for big bucks in the summer unless Roma decide to grow up as a club, give him the captain armband and make him our keeper for the next 10 years, like Buffon at Juve. Alisson is a phenomenon, now worth at least 70 million.  Ederson was paid 40 million by Man City and he’s Alisson’s reserve in the Brazil team that will go to the World Cup in Russia.

So, Roma holds a spectacular goalkeeper and he’s been decisive in every match. Last night he did the same keeping Roma alive in the first half, saving dangerous shots from Iago Falque and co. The Roma movement was very sloppy, predictable and lacked creativity. All the expectations about Schick vanished quickly, the youngster was left upfront alone without any assistance by El Sharaawy and co.  Cengiz Under tried to do his bit but the whole team did not pick up on anything.

So, a very poor first half by Roma reversed in the second half, with Radja playing closer to the Torino goal.  Nothing exceptional but at least we saw better movement in the middle of the park, and chances created.  Manolas header, De Rossi and Pellegrini to finish the job later.  All in the name of the late Davide Astori, with the players and the whole stadium feeling quite emotional.

Ups:  Alisson, Manolas, De Rossi, Florenzi and Pellegrini.   Downs: Schick, El Sharaawy.  Completely out of the picture last night.  Radja does not impress either in our opinion, he could do much more.

As Mr. EDF pointed, Schick must keep on working and he will eventually deliver, as Cengiz showed.  But he must show real commitment and belief, the fact that Dzeko stayed in the end is not so good from his side of things, probably he was promised a prime role with the bosnian departing, now we need to find out if his heart and commitment are still here or he’s already questioning his future.  The bottom line is that he’s a young player with potential but has not done anything so far in Serie A, look at Paulo Dybala, paid €40M same as Schick, he sat on the bench with Allegri for more than six months in his first year.  That’s what it takes to become a great player in a great team!

Next: Shakhtar on Tuesday.  Champions League. We enter the fight to go to the QF, the Last Eight. Dzeko and Fazio are back. All we need is real fighting spirit, just give everything to make it happen.  We will be there, in the Stadium. Looking for magic!  DAJE ROMA!

Good points, 3 points in the bag and second place above Atletico who lost to Chelsea. Bad points, a not so good performance against a team well below average standards in the Champions League.

We were expecting a more convincing spirit and attitude, you need that in European competitions, regardless. Some player slacked on the pitch, just not focused, especially after Manolas and Dzeko goals that put Roma ahead in the first 15 mins. The game wrapped up? You can’t think this way at this level, in fact Roma disappeared afterwards and Qarabag looked dangerous in some circumstances, pulled one back for Gonalons silly mistake, then nearly got an equaliser in the final minutes. So, not perfect at all, but at least we have the 3 points we need. Next Chelsea front and back. Atletico in Madrid will probably be the decider for second spot. Next Serie A, Milan on Sunday, they are not at their best but we need a more solid performance in the San Siro.  Forza Roma, as always! 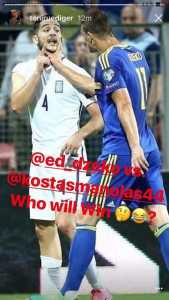