A pretty average game for a rough win. Eusebio Di Francesco had anticipated this during the press conference. Concentration is key.  Sometimes you also win games like this during a long season. Roma came from the big test against Chelsea. It was important not to lower the concentration.

The team did not shine like in London, the game plan was not so fluid in midfield and not so sharp upfront, but most importantly Roma did not concede anything at the back. Torino did not create a single goal chance, our keeper Alisson had somehow an easy afternoon. But Roma found hard to break the deadlock until midway in the second half.  Aleksandar Kolarov set piece strike resolved the game for Roma. The Serbian valued 5 million by Manchester City, half of the price Roma sold Mario Rui to Napoli in the summer. A real crack, so much personality and ability to stand out from the rest. A giant on that left band, another cracking goal after Chelsea, three points that help Roma climb up the standings.

No time to rest. On Wednesday comes minnow Crotone, surely Di Francesco will make a turnover, maybe good time to finally see in the field both Schick and Karsdorp, practically at their debut in Serie A.  More cannon ammunition to continue the chase at the top and of the league and qualify in Champions. Daje Roma!

“A dirty win”. This is how Eusebio Di Francesco described the first Roma win yesterday at the Stadio Azzurri D’Italia in Bergamo. The kind of win we hardly seen from Roma in recent years. Not exactly a great display, a few smudges especially in defense, some players not yet in the right frame, but above all a bit of luck this time. In the past we hardly seen getting 3 points like this, last year Atalanta even managed to turn the game around in the last few minutes. The team definitely still has to assimilate the new mechanisms and not yet in the right athletic condition so a Roma team that needs to be reviewed, but in the meantime we are very glad to take these 3 points back home.

We had said it yesterday, the important thing was to start well, if it had not been so, the usual controversy would be roaring around the team this morning, with the usual media fanfare waiting around the corner. It is useless to carry on weeping for the departures of Rudiger and Salah, other players have arrived, and for the sake of things we have to be confident, trust the work by EDF and the directors.

Roma is not yet brilliant, true, there are at least two players missing, and it was seen yesterday. Salah’s substitute and a strong centre half are badly needed. Manolas yesterday confirmed that he was not yet the Manolas of yesterday; too many mistakes, unlike Jesus, surely the best in defense yesterday with Kolarov, the leading man who secured victory with a trcky free kick. And if Moreno is new and still to be tested, Fazio is not a first choice because he is not a suitable player for EDF 4-3-3 formation.

At this stage, we take the 3 points, and we look forward to the next game. Roma had the toughest task yesterday, the other bigs boys have all won but against easier opponents. Inter Milan next: Spalletti’s boys got rid of Fiorentina quite easily last night. It will be a tough test. An important benchmark for the Giallorossi. We bet that the former Roma technician is looking forward to get his own back. This time Totti will be sitting in the stands as a new Roma Director. We will see if he will be wearing his suit and tie. And let’s see how Spalletti will be receive dby the Roma crowd, although we can imagine. The important thing is, however, to move forward, no time for hard feelings, Roma comes first. Our commonwealth, since 1927!

Hello everyone! AS Roma Corner is back, ready to restart with the new season, talking about our beloved Roma.

We have left this space with the the last game of the season still in mind, the last game of Francesco Totti with the Roma jersey. Totti-Day was remarkable, emotional and we cannot still believe it’s all over.   We are slowly trying to get it over, 25 sensational years with our Captain at the helm, the greatest Roma player of all time and arguably one of the greatest footballers ever seen in Italian football history.

What’s happened since Totti quitting? Lots going on. First and foremost, Francesco Totti is soon to become a Roma Director. What will be doing? We don’t know yet, and the man himself said he does not know yet. He said he will step in and figure what, slowly but surely. In the meantime, the team is in the US playing a number of friendlies at the International Champions Cup. We have new additions such as Gonalons, Moreno, Karsdorp, Pellegrini, Cengiz Under, Defrel and latest signing Alexander Kolarov coming into the frame. New Sporting Director Monchi is looking to bring another player name, Riyhad Mahrez. We will see what happens there.

Meanwhile the purchase of former Lazio Kolarov is a big debate because of his Lazio past experience. One may disagree, but we would like to clarify the following.

1. From the technical point of view, little to complain about, such a quick and experience is needed on the left-hand side.

3. His decision to come to Roma is proof that he does not really care much about Lazio, instead, it is a great deal to Lazio fans!

4. If some Roma fans do not want him then why didn’t they question about Zeman, Fuser, Peruzzi or Mihajlovic?

5. Kolarov is not a Lazio fan, nowhere near the likes of former player Lionello Manfredonia, this is nothing in comparison. The romanticism is nearly over in world football. Francesco Totti was the last emblem representing that kind of romance. Today there are only professional players out there, and Kolarov is one of them, looking to make an impact and give 100% to our Club. That’s why we say welcome Kolarov and Forza Roma! 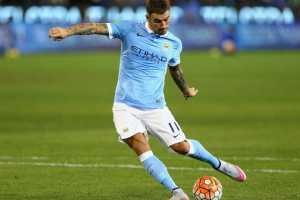